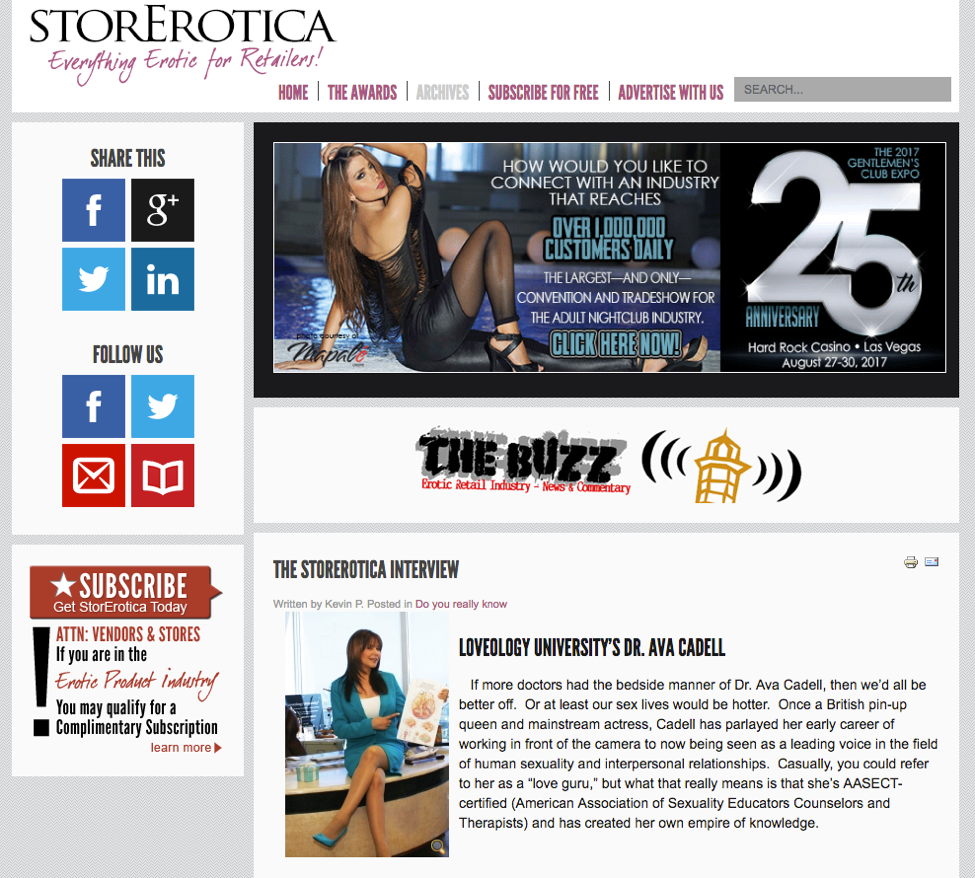 If more doctors had the bedside manner of Dr. Ava Cadell, then we’d all be better off.  Or at least our sex lives would be hotter.  Once a British pin-up queen and mainstream actress, Cadell has parlayed her early career of working in front of the camera to now being seen as a leading voice in the field of human sexuality and interpersonal relationships.  Casually, you could refer to her as a “love guru,” but what that really means is that she’s AASECT-certified (American Association of Sexuality Educators Counselors and Therapists) and has created her own empire of knowledge.

Cadell has a doctorate in human behavior from Newport University, CA, and a doctorate of education in human sexuality from the Institute for Advanced Study of Human Sexuality in San Francisco. Through her private practice in Los Angeles, she counsels individuals and couples on personal issues that range from anger management, fear of intimacy, lack of communication and lack of desire.

For those who can’t book an appointment at her Sunset Strip offices, there’s Cadell’s Loveology University, an online series of intimacy coaching courses.  Cadell has taken on the role as mentor to share her vast knowledge with motivated students who will become certified “loveologists.” Cadell’s mission is to promote the benefits of healthy love and intimacy around the globe, and training students worldwide is one way to spread her positive message. Cadell is also the author of eight books, and a regular media personality who has been seen on TV talk shows like Ricki Lake, Geraldo Rivera and The Doctors.

In this STOREROTICA Interview, we sat down on Dr. Ava’s couch (metaphorically speaking) to ask her about why so many of us want to be tied up and spanked lately.  And whether you have issues or not, she’s easy to talk to.  “There is never a boring day in my line work,” she says, “I just try and do it all because I love my profession.”

Cadell:  Well, I’d go as far back as the caveman era. Ever since man and woman have been on this planet, there has always been some sort of power play. Today, it has found itself in the mainstream.

One of the catalysts, of course, is the success of “50 Shades” and all of the publicity in its wake.  I think it has really empowered women. I have seen statistics that there has been a baby boom since the book came out.  Women are hornier than ever, and they’re taking responsibility for their sexual life and sharing their fantasies more openly.  So I’m excited in this new revival of power play.

But this has been going on since the beginning of time. Whether it’s hair pulling or spanking, most of us have experienced a version of power play without even knowing it.

STOREROTICA:  Another dimension of intimacy, really.